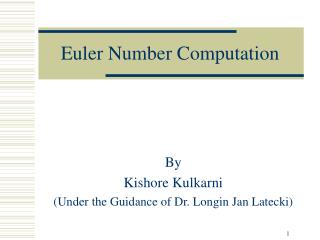 Strategies for Whole Number Computation - . progression. starts with addition and goes through subtraction,

Euler Circuit - . chapter 5. fleury’s algorithm. euler’s theorems are very useful to find if a graph has an euler

Euler construction - . spherical c 1 c 2 c 3 formed by pts where axes intersect sphere cos w = cos u cos v + sin u sin v

Euler Angles - . this means, that we can represent an orientation with 3 numbers assuming we limit ourselves to 3

Euler circuit - . theorem 1 if a graph g has an eulerian path, then it must have exactly two odd vertices. theorem 2