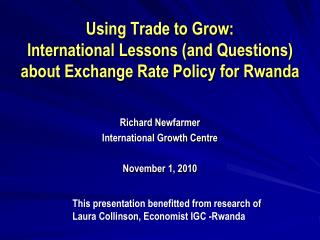 International Trade Theory - . 5. introduction theories that explain why it is beneficial for a country to engage in

The Global Economy Trade Theory - . are markets “moral”? . examples of markets working well? not so well? should we

An Egg Is an Egg Big Question: How do we change as we grow? - . author : nicki weiss genre: realistic fantasy. timer.