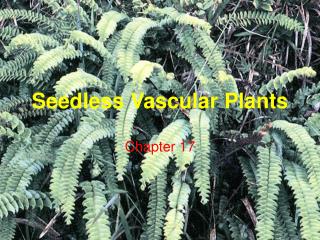 Chapter 29 - . plant diversity i how plants colonized land. figure 29.1. overview: the greening of earth looking at a

What are the differences between Vascular and non-Vascular Plants? - . let ’s take a closer look. what makes them

Seedless Plants - . pgs. 78 - 81. mosses and liverworts. one group of seedless plants is nonvascular plants like mosses

Plants - Vascular/non vascular, seedless/seed. plants. do now. quietly review your notes on plants for 5 minutes. round

The Plants - . links to start with!. things to think about!. chara : a modern algae that resembles primitive plant

Plants - . wednesday 09/12/2012. goal for the day. be able to distinguish major differences between vascular and