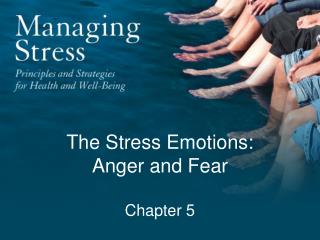 The Stress Emotions: Anger and Fear Chapter 5. “ To be free is not merely to cast off one’s chains, but to live in a way that respects and enhances the freedom of others.” —Nelson Mandela. Anger and Fear. There are two emotions specifically associated with the stress response: anger

Emotions and Defense Mechanisms A Taormina Per 2 3-13-02 - Emotions. emotions are the strong, immediate reactions that

Chill Skills: Anger Management and Conflict Resolution for Professionals - Conflict is a natural part of life. it is a

STRESS CONTROL TECHNIQUES - . what is stress?. stress is a condition of strain on one’s emotions, thought process and

ANGER MANAGEMENT - . anil kayhan turan. outline. what is anger what causes anger how does the body react to anger how

Difficult Emotions and Emotional Intelligence - . by: christine behlmann east. “never let the sun go down upon your

Emotions, Stress, and Health Chapter 11 - . stress symptoms introduction to the nature of stress and the broad range of

How Do You Feel About Stress? The Role of Positive Emotions in Stress! - . stress. “the process by which we perceive

Emotions and Body Chemicals - . what is emotions. mental state that arises spontaneously for example: anger happy