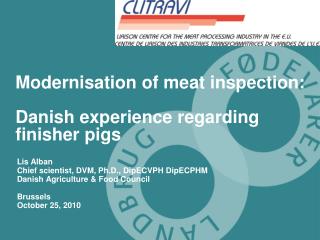 u/s 15900 - . prepare and present meat in the hospitality industry. level 1 credit 4. there are four basic meat types we

Meat Identification Quiz - . there are 73 cuts to be identified. in your answers, include species, primal cut, retail

WELDING INSPECTION AND QUALITY CONTROL - . upon completion of this module you will be able to: identify the different

The breeds of pigs - . by:charles huelsenbeck. your being put in charge of a farm that is looking into breeding swine to

Meat Inspection - . chapter 3 - pages 37-114. why do we need inspection?. about 90 diseases and parasites of animals can

Swine Flu - Information and precautions what is it ? swine flu is a respiratory disease and has some elements of a virus