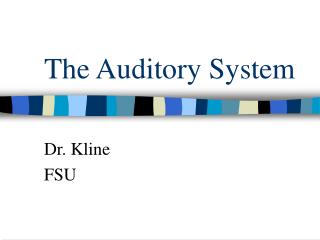 The Auditory System. Dr. Kline FSU. What is the physical stimulus for audition?. Sound- vibrations of the molecules in a medium like air. The hearing spectrum for humans is approximately between 20 to 20,000 Hz. 3 basic physical properties of sound. 1. Amplitude: intensity of sound

THE AUDITORY SYSTEM - . formula for a pure tone. middle ear cartoon. how does the basilar membrane move?. temporal

The Auditory System - Sound is created by pressure waves in air; these waves are induced by vibrating membranes such as

Hearing: The Auditory System - . by: lauren mccord &amp; kate pashley. i ntroduction. one of the most important

The Peripheral Auditory System - . george pollak section of neurobiology. 1. hair cells, the transducers of the auditory