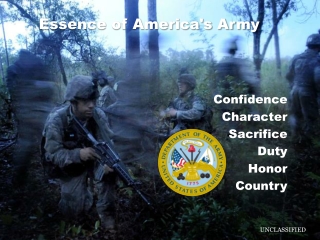 One Team! America ’ s Theater Army in the Indo-Pacific - 31 august 2018. the overall classification of this brief is:

U S Army Song - . first to fight for the right, and to build the nation’s might. and the army goes rolling along. proud

1960 ’ s America - . the world of the outsiders. general setting. the outsiders presumably takes place in tulsa,

1950’s America - . ms. cude. race relations . 1954 brown vs. board of education determined to be unconstitutional legal

America s Government - Overview. in this unit we will discuss what the colonies did to form their own government after