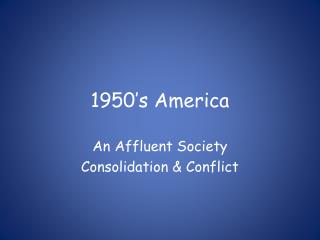 1. The European explorers who followed Columbus to North America - A) intended to found a new nation. b) continued to

The Experience of the Irish Immigrant in America - . the perseverance of the irish in the search for a better life of

The Incorporation of America - . the rise of smokestack america, 1865-1900. essential question. industrialization

THE INDUSTRIALIZATION OF AMERICA - . with a stride that astonished statisticians, the conquering hosts of business

CHAPTER 10 AMERICA CLAIMS AN EMPIRE - . section 1. imperialism and america. beginning in 1867 and continuing through the

PART ONE: SLAVERY IN ANTEBELLUM AMERICA - . a:slavery in antebellum america. 1818: the year of the birth of frederick

The Modern Period: 1900-1950 - The american dream. three basic principles:america is a new eden, a promised land" of

The Veldt - Ray bradbury (1950). the veldt. ray bradbury : a master of science fiction whose imaginative and lyrical