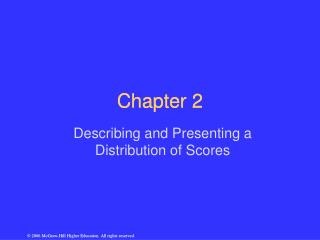 Chapter 2. Chapter 2. Describing and Presenting a Distribution of Scores. © 2006 McGraw-Hill Higher Education. All rights reserved. Chapter Objectives. After completing this chapter, you should be able to Define all statistical terms that are presented.