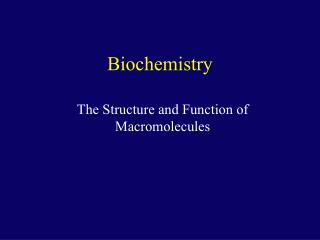 Biochemistry. The Structure and Function of Macromolecules. Carbon—Backbone of Biological Molecules. Although cells are 70–95% water, the rest consists mostly of carbon-based compounds Carbon is unique in its ability to form large, complex, and diverse molecules Biochemistry - . a way of. life. hierarchy of matter. atoms elements honc ps make up 90% of all living organisms monomers

Biochemistry - . objectives. what is biochemistry ?. remind me. why is photosynthesis so important?. carbon cycle. spend

Biochemistry - Metabolism. metabolism is the sun total of all the enzyme catalyzed reactions of the bodycatabolic

Biochemistry - . 2.1. matter. chemical changes in matter are essential to all life processes. matter : anything that

Biochemistry - . : chemistry in bio logical systems. biochemistry is the study of the chemical processes and