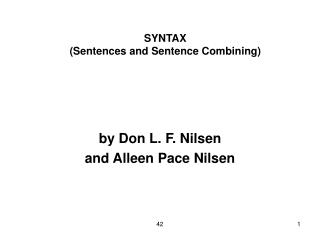 SYNTAX (Sentences and Sentence Combining) . by Don L. F. Nilsen and Alleen Pace Nilsen. Resolution of Ambiguities: Punctuation in Writing; Pausing & Intonation in Speech. The Czarina of Russia saw a note on the desk of Alexander III that read: Syntax: The analysis of sentence structure - . lane 321. definition of syntax. syntax is the study of the rules governing

Syntax - . definition of syntax. syntax is a branch of linguistics that studies the rules governing the way how words are

Chapter 4: Syntax Analysis - . csci 465. objectives. parser and its role in the design of compiler techniques used to

Chapter - 1 - . the basic php. php: hypertext preprocessor. outline. what is php ? history of php why php ? what is php

Java Syntax - . written by amir kirsh. lesson’s objectives . by the end of this lesson you will: be familiar with java