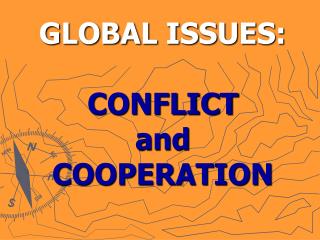 GLOBAL ISSUES: CONFLICT and COOPERATION. What causes wars in the world today? What role does GEOGRAPHY play in world conflicts?. Conflict is a state of discord caused by the actual or perceived opposition of needs , values and interests . . Global Environmental Issues 302 - . an overview of humanity’s effects on, and responses to, biodiversity change. my

Global Issues - . 7 th grade world geography mr. garvey. warm-up discussion. “when you try to pick out anything by