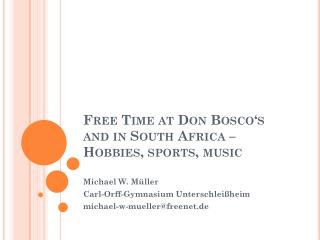 Free Time at Don Bosco‘s and in South Africa – Hobbies, sports , music. Michael W. Müller Carl-Orff-Gymnasium Unterschleißheim michael-w-mueller@freenet.de. Tell about yourself and think about others.

Free and Reduced-Price Applications, p.14 - . nonpricing program, p. 16. no separate charges are made for meals served to

Forum Submitter Pro - Forum memberships are usually free and a great way to connect with others who share your interests,

ECONOMICS - . crunch kit. basics of economics. § human wants are unlimited, but goods are scarce § there are no free

11 Habits for Developing a Good Study Routine - [visit http://www.developgoodhabits.com/ss-free to grab your free copy of

Free-fall - . an object in free-fall is only subject to the force of gravity (weight). f net = f g. (neglect air