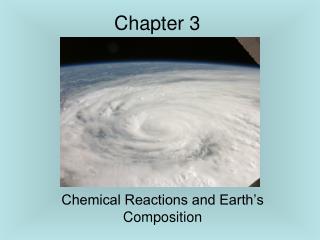 Chapter 3. Chemical Reactions and Earth’s Composition. The Development of Earth. Matter in the Universe condensed into planets. The planets closer to the sun have different chemical compositions than the rest of the universe. Many of the volatile chemicals were lost from these planets.

Chapter 2: Chemical Reactions Section 1: Observing Chemical Changes How can matter and changes in matter be described?