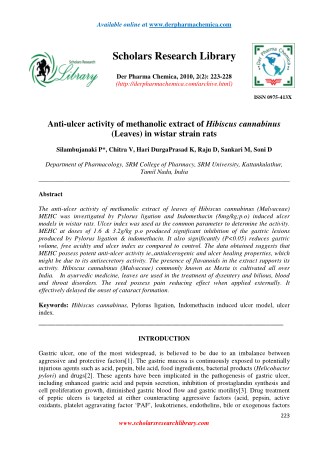 The anti-ulcer activity of methanolic extract of leaves of Hibiscus cannabinus (Malvaceae) MEHC was investigated by Pylorus ligation and Indomethacin (8mg/kg;p.o) induced ulcer models in wistar rats. Ulcer index was used as the common parameter to determine the activity. MEHC at doses of 1.6 & 3.2g/kg p.o produced significant inhibition of the gastric lesions produced by Pylorus Researching the Context of Purple Hibiscus

PURPLE HIBISCUS a bit of Merchant - Rules of the game. each group takes a turn and one person stands up and must answer