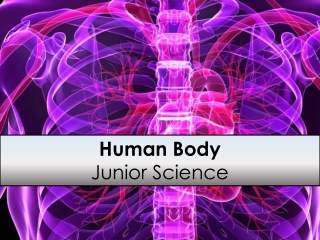 Human Body Junior Science. 1a. Is it Alive?. All living organisms are composed of cells. A cell is a small, membrane-bound compartment that contains all the chemicals and molecules that help support an organism's life. Biology is the study of living things.

Junior Science - . heat. by the end of this lesson you should be able to. op22: understand that heat is a form of energy

Human Body - . human body what about our brains?. when you are six years old, your brain will weigh three pounds. that is

Human Body - . human body quiz! . the bones make up what system? how many bones are in the human body? without our

Human Body - . 7-3.1 summarize the levels of structural organization within the human body (including cells, tissues,

HUMAN BODY - . organs – the lungs. the primary functions of your lungs are to transport oxygen from the air you breathe

Human body - . hermann juurik. why do people have hair ?. hair isn’t just for looks. the hair on our heads keeps us

HUMAN BODY - . organs – the stomach . people can, and have lived without a stomach if it has been removed because of

Human Body - . respiratory system. why do you need to breathe?. all the cells in your body require oxygen. without it,

Human Body - . circulatory system. what is it?. it's a big name for one of the most important systems in the body. made

Human Body - . by: mason. bones. bones are used for support, protection, and movement human skeleton has about 206 bones

HUMAN BODY - Organs – the liver. human body. the liver is the largest organ inside your body. it looks like a reddish

HUMAN BODY - . organs – the kidney. your kidneys are two of the most important organs in your body. they filter your

HUMAN BODY - . the human body is a remarkable structure consisting of cells arranged in an orderly fashion . cells are

HUMAN BODY - . the digestive system. what a story!!. the story we're about to tell is of stormy seas, acid rains, and

Human Body - . skeletal and muscular system. bones give us shape, support, and protection born with 300 bones, but as you