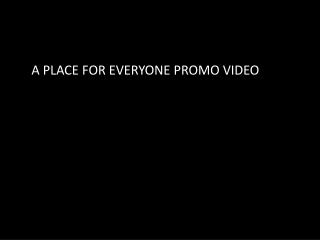 A PLACE FOR EVERYONE PROMO VIDEO. The Lost Cause. Why would Jesus so attracted to people who are nothing like Him? (The U nGodly , the UnHoly , the Unrighteous) VIDEO PROMO FOR RENEW 40 - . radical god the anchor of our faith. paul is telling about the most important things! 1 cor

ACCELERATION – TIME Promo Video - . first week we learned from moses: ps 90: 12  teach us to number our days, that we

Easy Way To Create A promo Video - Wanting to promote your business? the only way that works is video, we have the

Vietnam Customized Tours - A Place That Offers Something for Everyone - Sometimes, booking a group tour is difficult

The Ches Penney Family Y Building a place for everyone - . info session november 10, 2010. buildings and equipment are

A Place for Everyone: Understanding IT Culture Using S-Curves - . chris a. mccoy director of engineering computing email:

Where To Start To Make A Promo Video - Here's how to jump start your promotional video production. learn more at

Everyone a Leader … Everyone a Follower - . good followership the best training for leadership a navy perspective.

A Professional Design For Everyone - In the past, that was an expensive and tedious effort. my brand new logo solves that

Italy – A Holiday for Everyone - Just one of the beauties of holidaying in italy is that it has something for everyone.

A Place for Success - . john macbeath university of cambridge. ‘ ”. who said?. ‘teachers teach and children learn.