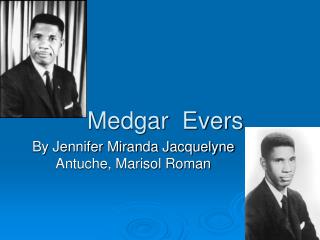 Medgar Evers. By Jennifer Miranda Jacquelyne Antuche, Marisol Roman. Early Life . Medgar Evers was born on July 2,1925 Decatur, Mississippi he died on June 12 1963. Dropped out of tenth grade in 1943. Fought in WWII was honorably discharged in 1945 as a Sergeant. Medgar Evers - . one of mississippi’s greatest leaders. as a child. medgar evers was born on july 2, 1925. he was from

Adalbert Evers - From a social service sector to a more civic culture of services?. the classic" concept of social

Fueling Our Future: Four Steps to the “Revolution in the Garage” Arno A. Evers, Arno A. Evers FAIR-PR, Germany