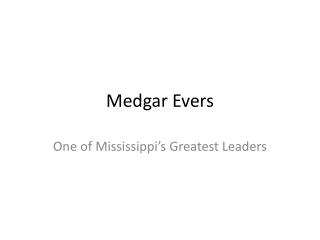 Medgar Evers. One of Mississippi’s Greatest Leaders. As a Child. Medgar Evers was born on July 2, 1925. He was from Decatur , Mississippi. He grew up in a farming family. He lived in the country. Education. Adalbert Evers - From a social service sector to a more civic culture of services?. the classic" concept of social

Fueling Our Future: Four Steps to the “Revolution in the Garage” Arno A. Evers, Arno A. Evers FAIR-PR, Germany