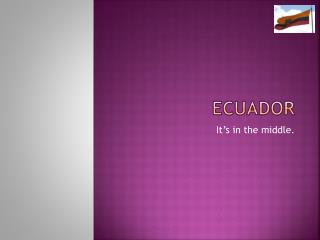 Ecuador. It’s in the middle. The Geography. Area: 276,840 sq. km, or about the size of the state of Colorado Made up four different geographical locations: The Andes Mountain The Coast The Amazon The Galapagos Island Large Cities Quito- Capital, located in the Andes mountains Ecuador - . by: william lo fys: life south of the border professor andy lopez. the flag. the flag of ecuador consist of

Ecuador - . ecuador is in south america. the capital is

Ecuador - An introduction to the republic of ecuador. ecuador. created for folkorica.us by mrs. naft- educational

Ecuador - . the trip for everyone!. insert movie here. transportation (by air). to ecuador: baltimore to quito, with

Ecuador - . where in the world is ecuador?. alabama. ecuador. ecuador’s flag. red stands for the blood shed for