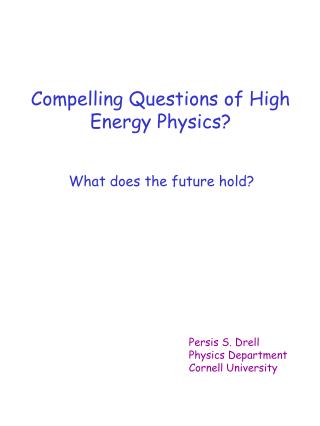 Compelling Questions of High Energy Physics?. What does the future hold?. Persis S. Drell Physics Department Cornell University. Physics: “The knife that cuts into the grain of nature”. - Jacob Bronowski. “The rules of the game are what we mean by fundamental physics…”. Thermal Physics - . topic 10.2 processes. the first law of thermodynamics. is a statement of the law of conservation of

Physics 218 Review - . prof. rupak mahapatra. checklist for final. work out all past finals from webpage do all end of