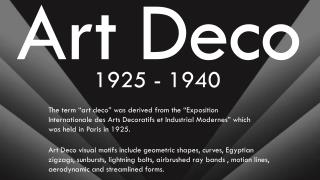 Art Deco. 1925 - 1940. The term “art deco” was derived from the “Exposition Internationale des Arts Decoratifs et Industrial Modernes ” which was held in Paris in 1925. Art Deco - . by naomi goodman. the start. art deco is an eclectic artistic and design style . the style originated in the

Art Deco - . 1920-1940. the birth of moderne. la société des artistes décorateurs (the society of the decorator

Art deco - . adie ruff. art deco 1925-1939. you are most likely to see geometric shapes and angles in the building

Aesthetic Styles: Art Deco - . say, you are asked to design a gui in the art deco style …. artistic abstract cubism

Art Deco Jewelry - The Timeless Art - While purchasing a piece of jewelry, most of the people look for a design that is