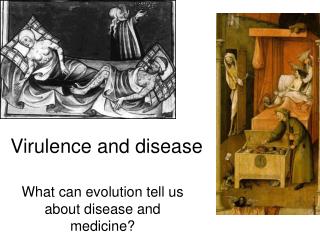 Virulence Ontology effort - . why we need a virulence ontology. there is a lot of effort being expended to characterize

The Evolution of Virulence - . e3: lecture 14. what is virulence?. most generally, virulence is defined as a pathogen’s

Disease and Disease Prevention - . ch 18 pg 456. what are we going to learn?. learn about noninfectious diseases risk

Lecture 15 Evolution of virulence I - . today and next class:. midterm next thursday. the “conventional wisdom” on