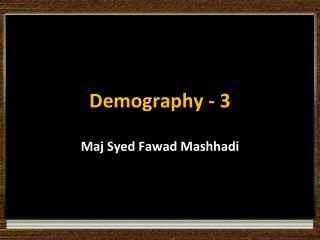 Demography - . essential questions what factors influence where people settle? is the world’s population growing too

DEMOGRAPHY - . dr. violet (de sa) pinto lecturer dept. of p.s.m. at the end of the session the student shall have the

Demography - . content objective. today i will evaluate demography and the measurement of population by completing a

Demography - Children in various context of exploitation and trafficking: the asian church response the philippine

DEMOGRAPHY - . the study of birth and death processes that determine growth and age structure of a population. each age

Demography - . birth, death, immigration, and emigration. populations grow due to birth and immigration , which occurs

Demography - Population structurethe population pyramid displays the age and sex structure of a country or given area.

Defining Demography - . monday, august 25. what is demography?. “…the study of the size, territorial distribution,