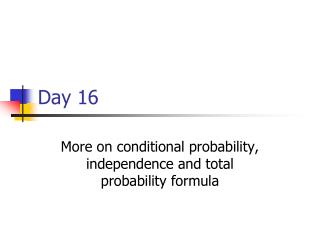 Lesson 16 Day 3 - . you will need your textbook, journal, pencil, and workbook. phonics and spelling. review: or

GEOG 101: Day 16 - . finishing up air pollution; starting on climate change. housekeeping items. did anyone turn up

Lesson 16 Day 1 - . read aloud: listening comprehension. today i will read a passage from a nonfiction book about 4 young

Lesson 16 Day 2 - . read aloud: listening comprehension. today i will read a passage from a nonfiction book about 4 young

Welcome to Day 16 - . principles of microeconomics. chapter 10 monopoly. 3 properties of monopoly 1) one seller 2) no

GEOGRAPHY 352: Day 16 - . human needs. housekeeping items. any announcements that anyone wants to make ? i was

GEOG 101: Day 16 - . oceans. housekeeping items. before i introduce our special guest speaker, i want to draw your

Quote of the Day #16 - . “society is produced by our wants and government by our wickedness.” -thomas paine. be ready

Bone Shattering: Nanowrimo Day 16 - 7 out of 10 people will suffer from neck pain at some time throughout their lives,