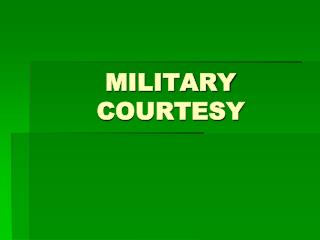 MILITARY COURTESY. Courtesy Defined. The expression or manifestation of consideration for the rights of others. More than merely obeying the forms of polite conduct. The kind of virtue expected of all individuals be it in the military or in civilian life. Military Customs Courtesy - . the purpose of this lesson is to briefly familiarize the class in the u.s. army's history

Military Customs and Courtesy - . greetings. each usphs commissioned officer (co) has a grade/rank/title. the rank/grade

Courtesy Inspection Report - . purpose. every vehicle that enters the shop must have a completed courtesy inspection