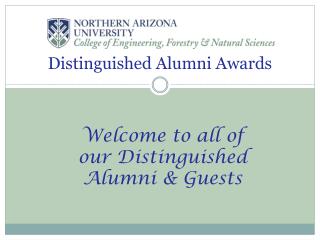 Distinguished Filipino Alumni - “ all i can suggest is to forget about yourself and think about your people. its always

ALUMNI - . what are they thinking???. why survey our alumni?. alumni are a primary “constituency” and they can tell

Distinguished Dietitian - 12/14/11. distinguished dietitian. the purpose of this presentation is to. inform area 326

Distinguished Talk - . on january 26, 2011 national taiwan university of science and