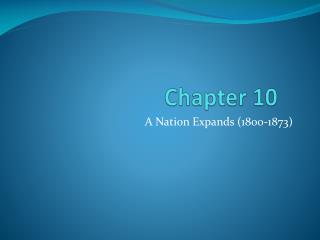 Chapter 10 . A Nation Expands (1800-1873). Important Terms. Pemmican – a food made of dried buffalo meat, buffalo fat, and berries. One kilogram of pemmican was considered equal to four kilograms of ordinary meat and it would last for years. It was an ideal food for long journeys.