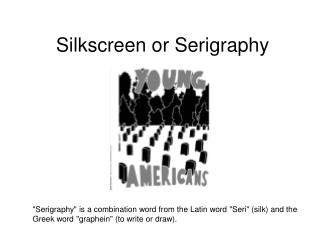 Silkscreen or Serigraphy. "Serigraphy" is a combination word from the Latin word "Seri" (silk) and the Greek word "graphein" (to write or draw). History - beginnings. Silkscreen - . materials. screen. the element that gives this technique its name is the silkscreen itself. the frame is

MKE heating with and without serigraphy     - . c. zannini and g. rumolo thanks to: t. argyropoulos m. barnes, t. bohl,

Producing a Hand Cut Silkscreen - . welcome to the exciting and creative world of screen printing. as you may know we are

Best silkscreen printing in Singapore - The fabric material of non woven bags are quite flexible, so they can be

digital imaging and photo emulsion silkscreen - What is silkscreen

How To Silkscreen A T-Shirt! - . mr. hobbs art. you must follow these steps to print your t-shirt:. find a partner to

Digital Imaging and Photo Emulsion Silkscreen - . what is silkscreen printing?. • silkscreen is a stencil printing

PCB Silkscreen – What Is It? Miracle Electronics - Pcb silkscreen is the last stage of the fabrication process. either

DO MATH WITH ME GRANDMA (OR GRANDPA OR Auntie or uncle or mommy or daddy or Cousins… - . jill gardner