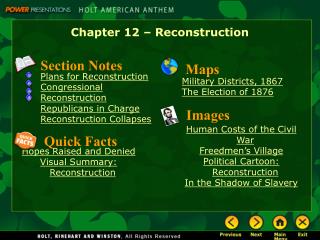 INTERNAL RECONSTRUCTION ) - . alteration of share capital : according to section 94 of the companies act, a limited

REVIEWING FOR THE U.S. HISTORY EOCT - . from reconstruction to world war one. identify legal, political, and social

The Reconstruction Period - . 1865-1877. important questions . if preserving the union was lincoln’s war aim, then what

The End of Reconstruction - . ss8h7 the student will evaluate key political, social, and economic changes that occurred

Chapter 13 The Meaning of Freedom, The Failure of Reconstruction - . the first seven african americans to serve in the

Louisiana History Reconstruction Era Test Chapter 11 - . us history. who became president of the united states after