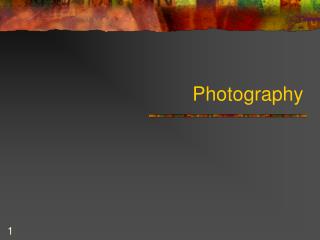 History of Photography - . photography was one of the many inventions of the 19 th century– the electric light, the

Forensic Aspects of Photography - . although forensic photography is simply the application of photographic principles to

Rules for Photography - . let’s take some gooooood pictures!. a note about rules. rules are great because they help us

Portrait Photography - . topics we will discuss. lighting angles posing tips. first, and foremost…. as a beginner in

Brief lectures in Media History - . introduction overview of history (1 of 15) . this lecture is about history … . what

PHOTOGRAPHY - . photography is derived from the greek words fotos – light graphein - to draw it is a method of