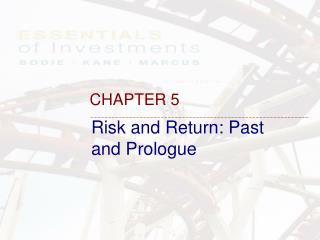 CHAPTER 5. Risk and Return: Past and Prologue. The Goals of Chapter 5. Introduce methods to calculate the rate of return (ROR) Introduce the estimation of risk (the uncertainty of ROR) and the risk premium Show the historical return-risk patterns Consider the inflation rate and real ROR