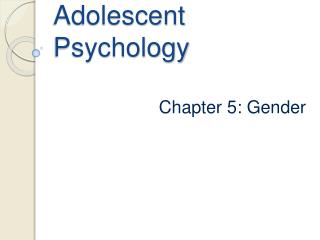 Adolescent Psychology. Chapter 5: Gender. What is Gender?. Is there a difference between gender & sex? Gender refers to the psychological & sociocultural dimensions of being male or female. Adolescent Psychology - . march 26th, 2009. dates and reminders…. phase two of the annotated bibliography is due april

Adolescent Psychology - . chapter 1. today we will…. cover some history talk a bit about periods of development discuss

Child &amp; Adolescent Psychology - . welcome to seminar #8. tonight. tonight we are going to look at research in

ELM 200 CHILD AND EARLY ADOLESCENT DEVELOPMENT AND PSYCHOLOGY-GCU - Just click on below link to download this course:

How to be victorious in Dr. V’s adolescent psychology class - . by dr. v’s ta’s (bethany and valerie ). in class

Adolescent Literacy - . “literacy is typically measured as reading and writing. the fail-safe definition of literacy is

Adolescent Nutrition - . dr.fatemeh famouri pediatric gastroenterologist. adolescence. it is the time between the onset

Adolescent Attractions - . avenues of adolescent attraction. conversations during classes or in the hall, glances,