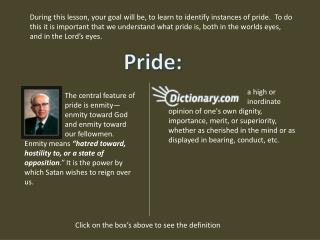 During this lesson, your goal will be, to learn to identify instances of pride. To do this it is important that we understand what pride is, both in the worlds eyes, and in the Lord’s eyes. . Pride:. The central feature of PUNCHING OUT PRIDE - . pride and pals. Α λαζονεια : an inflated opinion of oneself with the lack of basis for

Obadiah – Why God Hates Pride Obadiah - . “ a jet tour through the minor prophets” today: obadiah one of the few

Pride and Vanity - . 1. write the following definitions. pride~ 1. sense of one’s own proper dignity or value. 2.

5/6 and 7/8 Ambassador Training - . pride. welcome!!! please find a seat and start eating your lunch. make sure you have

Pride and Prejudice by Jane Austen - . historical background and brief overview of novel eq: how does society determine