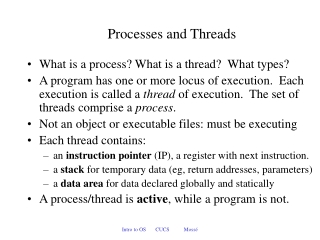 Processes and Threads. What is a process? What is a thread? What types? A program has one or more locus of execution. Each execution is called a thread of execution. The set of threads comprise a process . Not an object or executable files: must be executing Each thread contains: Threads - . announcements. last time we discussed how processes can be independent or work cooperatively cooperating