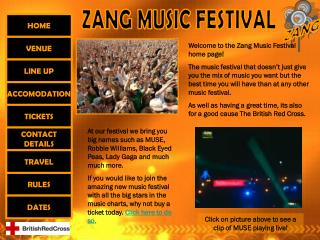 ZANG MUSIC FESTIVAL. Welcome to the Zang Music Festival home page! The music festival that doesn’t just give you the mix of music you want but the best time you will have than at any other music festival. As well as having a great time, its also for a good cause The British Red Cross. Copywriting Tips for the Three Most Important Pages on Your Website - Your home page, landing page, and about page are

Glastonbury: Mud and music - Revelers head to the annual music festival at worthy farm in