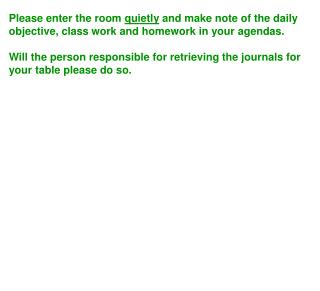 Please enter the room quietly and make note of the daily objective, class work and homework in your agendas. Will the person responsible for retrieving the journals for your table please do so. Vocab Word Search (pages 191 - 195):. extended family -. sphere of influence -. alliance -. Word Search: Family History Records - In this puzzle we have hidden 12 types of records genealogists often use to trace

Search Pages and Results - . searching is where a user types a query into a computer and an algorithm looks at a set of

Key word search - . google. important questions. what is happening in your own institution/national level/international