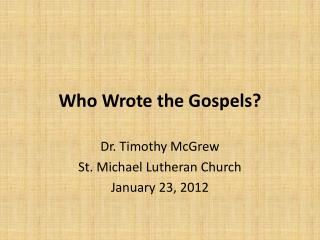 Who Wrote the Gospels?. Dr. Timothy McGrew St. Michael Lutheran Church January 23, 2012. Deuteronomy 32:7. Remember the days of old; consider the years of many generations; ask your father, and he will show you, your elders, and they will tell you. Authenticity and Genuineness. VENTILATOR THE BASIC- COURSE - . history of ventilator. early history of ancient times . old testament there is a mention

Leviathan - Thomas hobbes thomas hobbes (1588-1769) son of a priest (who had to flee) was educated by a wealthy uncle.

The Bible: Are There Errors? - . â€œthe bible is a product of man, my dear. not of godâ€¦. man created it as a

Aesop - . a nd his fables . aesop. ancient greek storyteller; lived around 550 bc also a slave in the home of a wealthy