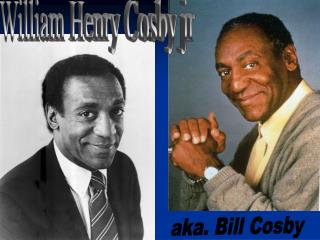 William Henry Cosby jr. aka. Bill Cosby. How do we define the personality traits of a hero?. William Cosby 202-366-4969 william.cosbydot - Overview . some insight in to the recent increases in motorcyclist

Bill Cosby - “ he relies on his facial expressions and, more importantly, his voice to add to the story.” -michelle