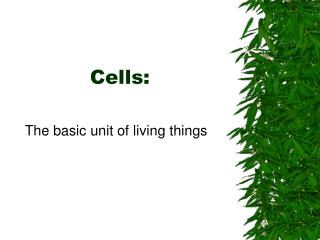 Cells:. The basic unit of living things. Section 1: Discovery and Diversity of Cells. All living things are made of cells. Cells are membrane-covered structures that contain all the materials necessary for life. Cells weren’t discovered until the mid-1600’s once the microscope was invented. Do Now 01.11.19 - On a separate sheet of paper, write everything you know/have learned regarding the picture below. write

Stem Cells - . what are stem cells?. stem cells are cells found in most multi-cellular organisms.  t hey are cells that

B2: Cells - . cell structure and organisation. cells. all living organisms are made up of cells. animal cells. the shape

Topic 2: Cells - . (12 hours). 2.1.1 outline the cell theory. include the following. living organisms are composed of

Absorptive cells Enterocyte : nutrient absorption - Cells proposed to be derived from iscs at the crypt base. other tuft

Division Estimator (WIA and DNBI) - Blue cells are user input areas, yellow cells are formulas and are locked so the user

THE CELL - . i . why study cells?. body is made up of cells: rbc nerve cells skin cells muscle cells. b. some more

Cells! - . cell theory. is one of the major foundations of biology has 3 main components and 2 exceptions all living