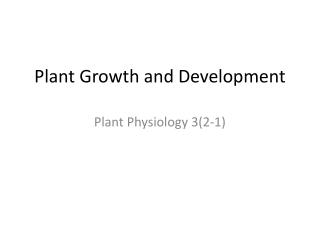 Plant Growth and Development. Plant Physiology 3(2-1). From germination to senescence!!. Zygote Embryo Seedling. How do new plant structures arise from preexisting structures? How do plant tissues grow in a particular pattern?

Growth Stages of the Rice Plant - . part 1: understanding the palaycheck system. we can’t talk to our plants, or even

The Growth of the Thirteen Colonies - . 1607-1770. life in the colonies. essential question : how did geography affect

GROWTH AND DEVELOPMENT INFANCY 0-3 YEARS - . throughout our lives we grow and develop. we change from being helpless