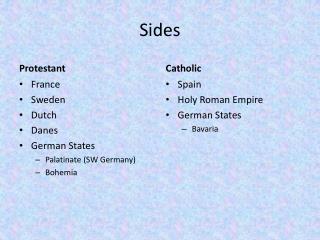 Opposing Sides - . what is necessary to win a war?. loyalists. british expected war to be over quickly, most powerful

Doubling Sides - You need square inch tiles for this lesson.. use your tiles to create a rectangle that is 2 inches by 3

McDonald’s Sides - If you’re craving for something light yet yummy snack to munch on, mcdonald’s offers you a wide

17 Sides - . by mike frost. what can you construct with straight edge and compass?. lengths can be multiplied. lengths

Opposing Sides - . the union and confederacy. the union. larger population greater industrial base could supply all its

Taking Sides - . you will discuss the causes of the civil war and research states' rights, slavery, tariff disputes, and