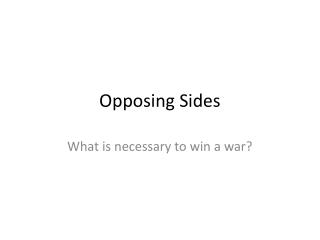 Opposing Sides. What is necessary to win a war?. Loyalists. British expected war to be over quickly, most powerful army in the world-J. Adams ”we have a long and bloody war to go through” Declaration of Independence made war unavoidable Opposing Sides - . the union and confederacy. the union. larger population greater industrial base could supply all its

Opposing viewpoints - . today you are going to read an article that challenges/criticizes the movie, the blind side,

Opposing Views - . “conservative” vs. “liberal” law vs. grace this over-simplified dichotomy manifests itself

Opposing change - . condition. effect. temperature. concentration. pressure. whenever a change is made to a reversible

Opposing Policy Propositions - . refutation. refuting means proving a person or statement to be wrong . in other words,

The Opposing Side - . why should i present the opposing side?. strengthens your credibility knowledgeable fair interested

Opposing V iews - . why should i present the opposing side?. including opposing arguments: strengthens your credibility

Doubling Sides - You need square inch tiles for this lesson.. use your tiles to create a rectangle that is 2 inches by 3