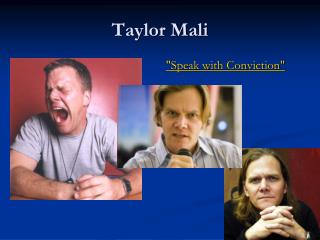 Taylor Mali. "Speak with Conviction". Figurative Language Sensory Language Sound Devices Poetry. Definition. Figurative language is the opposite of literal language. The words go beyond what they exactly mean for a special effect. Simile. Definition: Kingdoms of the Grasslands – West African Kingdoms of Ghana, Mali, and Songhai - . chapter 8 (2 of 4). need to know:

Taylor Family Reunion 2010 - . our branch of the taylor family originates in haverhill, england which is located

Frederick Taylor - . “the father of scientific management”. and the evolution of management theory. the travel of a

Kingdoms of the Grasslands – West African Kingdoms of Ghana, Mali, and Songhai - . chapter 8 (2 of 4). need to know:

Created by Wendy Taylor - Vocabulary instruction. created by wendy taylor. some information of about vocabulary i

Figurative Language and Poetry Terms - . oxymoron and onomatopoeia. oxymoron. an oxymoron is a figure of speech that puts