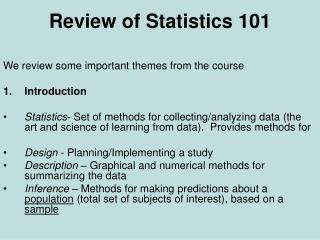 Review of Statistics 101. We review some important themes from the course Introduction Statistics - Set of methods for collecting/analyzing data (the art and science of learning from data). Provides methods for Design - Planning/Implementing a study

Statistics 101 - . why statistics ?. to understand studies in clinical journals. to design and analyze clinical research

Review of Statistics - . mean, median, mode and range. mean – the sum of the data divided by the number of items in the

Statistics Review - . why we care. analysts must be able to evaluate quantitative information to make predictions.

Statistics Review - . mean. the mean often means “average”. to find the mean: take the sum of the numbers divided by

All of Statistics: A Concise Course in Statistical Inference - . chapter 3 expectation prepared by gene shiau. the