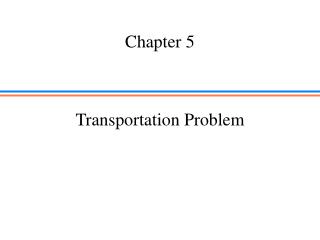 Chapter 5. Transportation Problem. Reading. Chapter 5 (Sections 5.1,5.2 and 5.3) of Operations Research, Seventh Edition, 7 th Edition, by Hamdy A. Taha, Prentice Hall. Lecture Objectives. At the end of the lecture, each student should be able to: