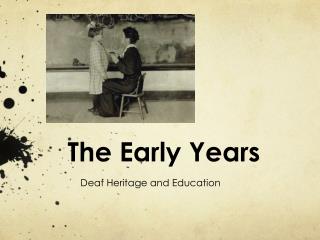 The Early Years . Deaf Heritage and Education. Before 1816. No schools for the Deaf People tried to start schools but they all closed . 1817. Connecticut Asylum for the Education and Instruction of Deaf and Dumb Persons opened Serviced deaf students from all over the country The Early Years - . can you americans just leave me alone and let me

The Early Years … - Elvis presley was born january 8 1935 in tupelo mississippi. elvis got married with priscilla and

The Early Years - . minibeasts. we learned all about the life cycle of a butterfly. it starts as an egg on a a leaf, then

Early Years - . the emerging vision for government policy on 0-5s. 1. early years is a priority. early years has had

Electrons – the early years - . electromagnetic radiation. radiant energy that travels through space at the speed of

Children The Early Years - . chapter 4…pregnancy. 1. pregnancy is the process through which a new human prepares to

The Early Years Photography - . “ the photograph was the ultimate response to a social and cultural appetite for a more