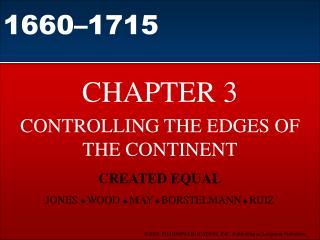 1660–1715. CHAPTER 3 CONTROLLING THE EDGES OF THE CONTINENT. CREATED EQUAL JONES  WOOD  MAY  BORSTELMANN  RUIZ. “How miserable that man is that Governes a People where six parts of seaven at least are Poore Endebted Discontented and Armed.”. The French Revolution - . what is a revolution? what would cause a revolution to occur?. “l’etat c’est moi” (i am

Chapter 3 : The American Colonies Take Shape - . immigration and slavery 90% of migrants to english colonies from england