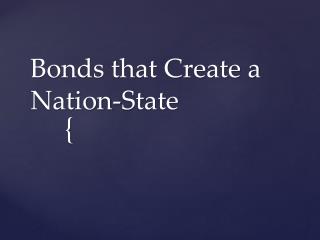 Bonds that Create a Nation-State. Nationalism: The belief that one’s greatest loyalty should NOT be to a king or an empire but to a NATION of people who share a common culture and history. Nation-state: When a nation has it’s own independent government. Nationalism and Nation-State. Chapter 17 Part 2 Bonds Payable - Issuing bonds at a premium. premium on bonds payable is an account used when bonds are

Roles of State Entities in General Obligation GO Bond Financings - 2. the state of california's go bond ratings are the

Chemical Bonds - . all about the ……? 2d law of thermodynamics – entropy – natural state is toward minimum energy

I. State and Nation - . a. state: political unit (can be used interchangeably with country ) b. nation: refers to a

Nationalism in the 19 th &amp; 20 th Century - . nationalism : strong pride based on a person identifying with a

Pressures on the nation-state - . the future of the nation state in a globalised world. internal pressures. groups are

What Is It? - . nationalism emerged as part of the french revolution it is based on being a part of a nation-state.

The Formation of Western Europe 800-1500 - . section 1. starter questions. what was the largest state in western europe

Ch.16 Sec. 1 The Road to WWI - . road to war nation state- an independent state inhabited by all the people of one nation

The End of the Nation-State System? - . 1648 to 1990s? nation-states are powerful, but new actors? igos ngos individuals.

Political Geography - . i. state and nation. a. state: political unit (can be used interchangeably with country) b.

Political Geography - . basic introductory concepts. state a government with a capitol and border examples – the usa,

The Nation State - . ch 23 part iii. reform in great britain. very gradual reform act of 1884 suffrage for all men who