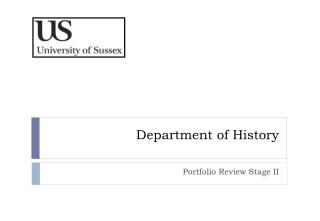 DEPARTMENT OF HISTORY - . overall designwhat draws your eye first?what does the dominant part of the image portray?what

History of Brett’s Department Store - . by: megan vossen and nicole jehorek group #24. how everything got started. born

FSU HISTORY PROGRAM Department of Government and History - . welcome when choosing a major, we hope you will consider the

Plymstock School History Department - . aims:. how did mass production evolve? can we develop it? have our group work

Department of History - . “the past is a foreign country; they do things differently there.” -j.p. hartley. join the